The most famous literary version of Melusine tales, that of Jean d'Arras, compiled about 1382–1394, was worked into a collection of "spinning yarns" as told by ladies at their spinning. Coudrette (Couldrette) wrote The Romans of Partenay or of Lusignen: Otherwise known as the Tale of Melusine, giving source and historical notes, dates and background of the story. He goes in to detail and depth about the relationship of Melusine and Raymondin, their initial meeting and the complete story.
The tale was translated into German in 1456 by Thüring von Ringoltingen, the version of which became popular as a chapbook. It was later translated into English c. 1500, and often printed in both the 15th century and the 16th century. A prose version is entitled the Chronique de la princesse.
It tells how in the time of the crusades, Elynas, the King of Albany (an old name for Scotland or Alba), went hunting one day and came across a beautiful lady in the forest. She was Pressyne, mother of Melusine. He persuaded her to marry him but she agreed, only on the promise — for there is often a hard and fatal condition attached to any pairing of fay and mortal — that he must not enter her chamber when she birthed or bathed her children. She gave birth to triplets. When he violated this taboo, Pressyne left the kingdom, together with her three daughters, and traveled to the lost Isle ofAvalon.
The three girls — Melusine, Melior, and Palatyne — grew up in Avalon. On their fifteenth birthday, Melusine, the eldest, asked why they had been taken to Avalon. Upon hearing of their father's broken promise, Melusine sought revenge. She and her sisters captured Elynas and locked him, with his riches, in a mountain. Pressyne became enraged when she learned what the girls had done, and punished them for their disrespect to their father. Melusine was condemned to take the form of a serpent from the waist down every Saturday. In other stories, she takes on the form of a mermaid.
Raymond of Poitou came across Melusine in a forest of Coulombiers in Poitou in France, and proposed marriage. Just as her mother had done, she laid a condition, that he must never enter her chamber on a Saturday. He broke the promise and saw her in the form of a part-woman part-serpent. She forgave him. When during a disagreement, he called her a "serpent" in front of his court, she assumed the form of a dragon, provided him with two magic rings, and flew off, never to return.[1]
In "The Wandering Unicorn" by Manuel Mujica Láinez, Melusine tells her tale of several centuries of existence from her original curse to the time of theCrusades.[2] 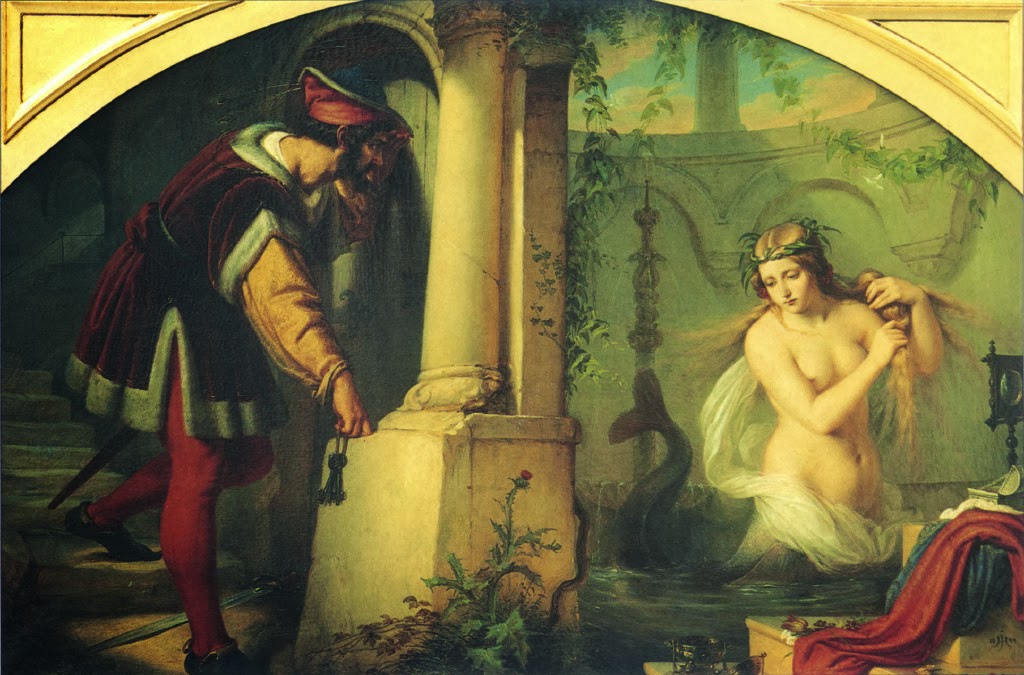